So, I finally joined the 21st century and bought an iPhone this past weekend. Not only did I not have an iPhone prior to Sunday, but I had a totally awesome pay-as-you-go flip phone. The voice mail didn’t even work properly. And can i just tell you that I was the Queen of T9 texting? Oh, yeah.

Now I have this super advanced iPhone 5 and I swear there are infants out there who can work this thing better than I can. I’m like a monkey trying to text. I didn’t know that I could send a picture from my phone to my email. My youngest sister had to show me how to get in to facebook.

It made me feel really stupid.

I am looking forward to some things – I can finally use instagram and post all kinds of random photos that I normally would take with my neon pink point and shoot camera. I can use twitter…assuming I actually take the time to learn HOW to use twitter. I can waste copious amounts of time playing stupid games or checking facebook incessantly. Oh, wait. I won’t do those last two because I hate when other people do it. 🙂 I will not turn into a slave of the smart phone!!

In other news: I went for a run this morning! And that picture above is one of the first ones taken with the aforementioned new iPhone. Granted I had to stop running (but only for a second, I swear!) to take it so it wouldn’t be blurry, but I took it!

Can I tell you how much better my day was because I got up and ran this morning? I had no real route in mind, I just wanted to get out and (it has to be said) get it over with. Plus it was raining – this annoying misty drizzle that wasn’t enough to keep me inside, but enough to keep me damp and uncomfortable, so my original plan was to run a few laps around the lake near my house and call it a day, but halfway around the lake I was attacked by a goose.

I kid you not.

Confession time: I have a fear of geese, ever since a few weeks (months?) ago when I saw a story on the news about the geese in some major city (NYC, maybe?) and how they were going all crazy and attacking people. So this morning I see this goose at the edge of the lake and standing beside it is the most adorable little gosling…and I knew I was in trouble. I had to follow the path, because there was no room to maneuver, and sure enough doesn’t this stupid goose arch his creepy neck and stick his beak out and make a beeline straight for my shins. What did I do, you ask?

I screamed like a little girl and veered off the path into the woods to get away.

Once I escaped the crazy goose, I instead decided to run a different path. Unfortunately, as I was making my way back towards my apartment I had to finish my run on the other side of the lake. It was only for a couple tenths of a mile, and the goose was on the other side, so I figured I was fine, right?

Wouldn’t you know it, I get to the other side of the lake and there are more geese with their goslings?! And of course, it’s like a coordinated attack. (I should have seen it coming, right?) So I had to yell at the geese again and this time detour through the sopping wet grass. Lovely. I hate wet socks.

But needless to say, I survived my run. I did 3.1 miles in 30 minutes which averages to 9:25 minutes per mile. Which is good, but I felt like I was running faster. Am I the only one who does that? I just got the mapmyrun app on my new iPhone (have I mentioned I have a new iPhone?) so hopefully I can start tracking my splits. I’d be interested to see them, because I suspect I start and end pretty fast, but the middle is what kills me.

One more thing before I go…not only did I get up and run this morning, but I also was able to write a few pages of my novel! Talk about a red letter day, people! I write freehand, in a large spiral notebook I carry in my huge totebag of a purse so I always have it with me, and then once I’ve gotten a decent chunk written I go back to my computer and type it all out. It sounds tedious but I love it. It gives me a sense of accomplishment to see all those scribbled pages. (And I do mean scribbled!) 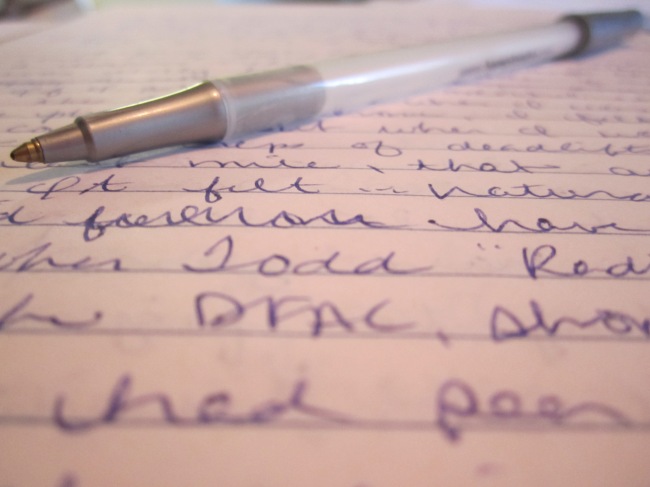 I also had the opportunity to connect with a few new people today, so I’m pretty stoked! For a gray and rainy Tuesday, this one was definitely not so bad!

I was blessed to have the opportunity to travel to India a few years ago, and let me tell you, it was an experience! I had a love/hate relationship the entire time. For example, the above picture? LOVE.

This picture? Which was taken outside my HOTEL, might I add? HATE.

Camels in the street? Love. Mostly. 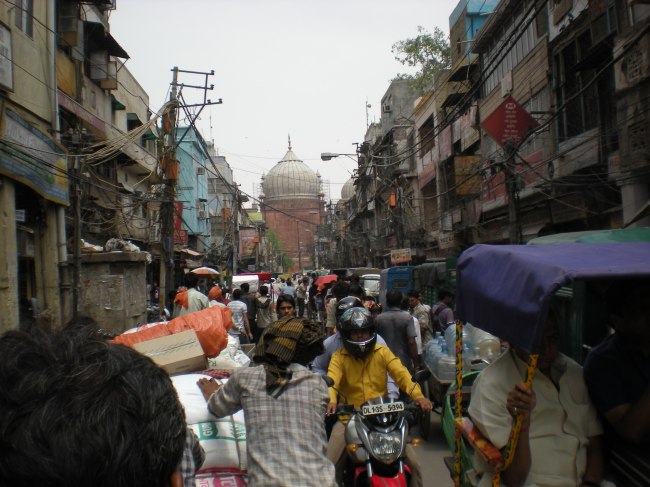 The crowds and the questionable looking electrical wires everywhere? HATE.

But my favorite thing about India (yes, even more than the Taj Mahal), is the food.

Oh, how I adore Indian food. And for some reason it’s been on my mind a lot lately. So when I bought a whole head of cauliflower during my last shopping trip, I decided I would substitute cauliflower for rice and make fragrant pilau rice!

I didn’t use a recipe for this…I just looked at a lot of recipes online and then threw together what I could remember and seasoned it to taste. But let’s be serious – can you really go wrong with cinnamon, cumin, cloves and saffron?

The thing I love about pilau rice is the sweet and savory taste it has. The savory, obviously, comes from the rice (or cauliflower), the cashew nuts, and the saffron and turmeric. The sweet comes from the cinnamon and raisins, and there is just a hint of spice added with the cumin and cloves.

The hardest part about this meal was grating the cauliflower – which you may remember from my paleo paella.  This time I got smart – I used my food processor! Brilliant. 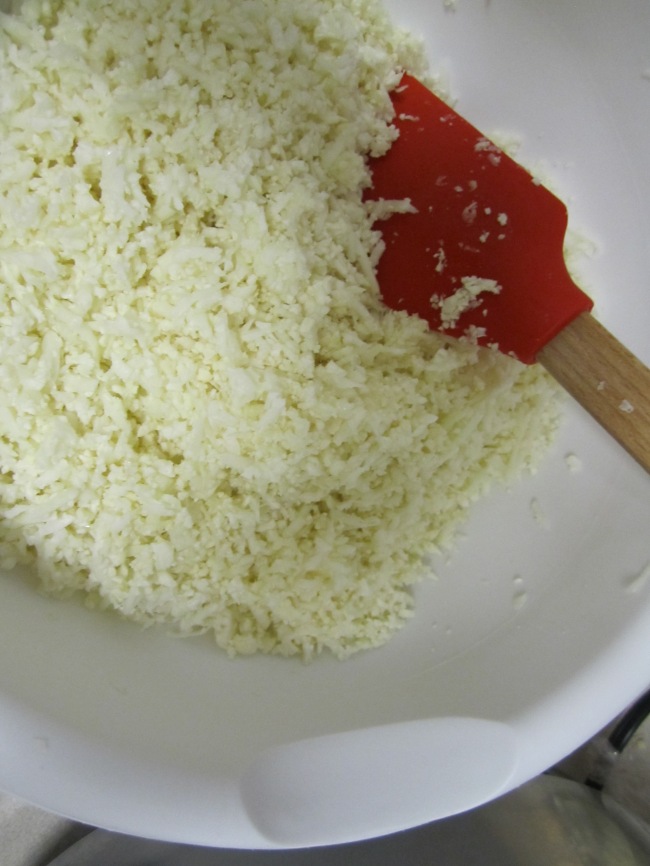 Dude – if you ever need to grate cauliflower, use a food processor. It’s WAY less work.

Anyway, once you get that done, it’s a matter of throwing everything else into the skillet at the appropriate time and just letting it heat through. That’s the beauty of using cauliflower instead of rice – it takes barely any time to cook.

Easy and delicious! This would be fantastic as a side for a spicy curry with garlic naan. A spicy main course would complement the sweet in the rice perfectly. Yum.

Unfortunately, I had neither spicy curry nor naan, so I made a steak. It was good, but not as something spicy would have been.

What you’ll need: (serves a lot)

Grate your cauliflower and set aside. In a large skillet, heat 2 tbsp olive oil on medium high heat. Add cashews, cumin, cloves, and cinnamon stick and fry for 2 minutes or until cashews start to toast.

Add shallots and cook until translucent. Add raisins, turmeric, and if your cashews were unsalted like mine were, toss in a pinch or two of salt to taste. Fry another 2 minutes until everything starts to smell really good – but make sure you don’t burn the raisins!

Add your cauliflower to the pan and stir everything up to combine. Add the saffron threads (crumble them between your fingers first) and the cinnamon, and add about 1/4 cup hot water to the pan. Mix it up again, and heat on medium to low heat for a few minutes until everything is mixed well and heated through. Garnish with raw cashews and cinnamon stick.

Be careful to remove the cinnamon stick and cloves before you eat!

Have a great Monday, everyone! 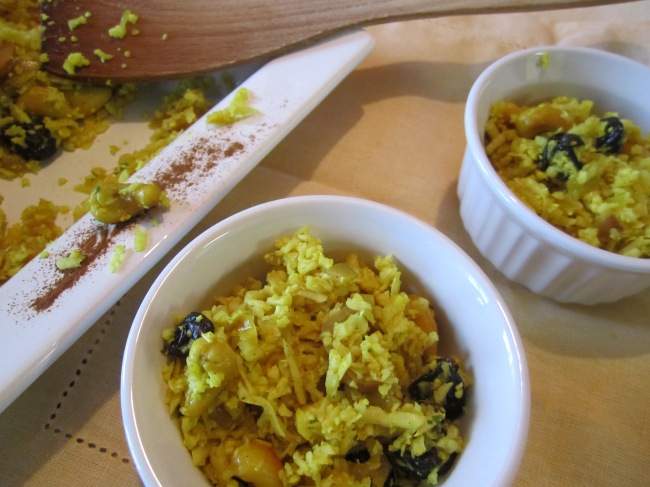 Can I be honest with you?

I’m feeling a little discouraged today. Actually, I’ve been feeling a little discouraged a lot of days lately. You see, I seem to have fallen into a slump — one where everything I’ve been trying to do has been lacking. I’ve only run a handful of times. I’ve only written a handful of paragraphs. I haven’t opened my Bible in….well, longer that I’d like to admit to the cyberworld. 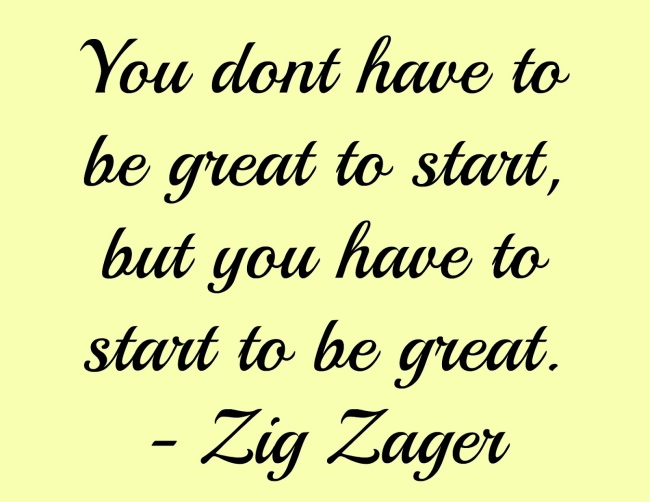 I’ve been having a hard time trying to balance all the things I want to do. I want to run 3-4 times a week instead of just 1 or 2. I want to write a little bit of my novel every day, or even a few times a week, instead of fits and starts throughout the month. I start out with grand plans and goals, only to give up or fall behind, and the more I fall behind, the more discouraged I start to feel. I spend less and less time doing the things I love and more and more time sitting around thinking about doing them but not, or wondering why I’m not doing them, and what the heck happened to get me so far off track. Please, tell me I’m not alone on this seesaw.

I wasn’t sure what I wanted to post for today’s blog, but The Man told me to write was was in my heart. So, I thought about it. And I thought, I can’t possibly be the only person out there who is suffering from self doubt and frustration. So, I decided to share where I am, and in doing so I found some quotes I thought might help me, so I decided ‘why not?’

It’s easy to fall into those feelings of doubt, despair, and frustration. Lately for me I’ve been struggling with my writing. I seem to have hit a bit of writer’s block, and what I have written lately makes me think it’s terrible, and I just want to give up. As a matter of fact, sometimes I do give up – for a little while. But then I have to remind myself – I’ve written almost 150 pages of a novel. It may not be a good novel, but I’ll never know until I finish it, right? I’ve never finished a novel before in my life. I’ve started novels lots of times, but I never seem to have the courage or the patience or the motivation or the self confidence to stick it out.

This time, I’m going to.

I’ve also been telling myself for weeks that I’m going to start running longer distances or running more times per week. But then something will happen – like it will be too windy, or I’ll be too tired, or it’s too dark out, or I have a headache. Then, before I know it – another week has gone by and I’ve had one or two half-hearted runs that week. 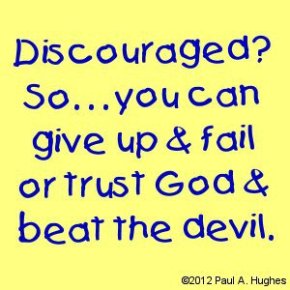 So, I’m done with being discouraged. Sure, it won’t be easy, and I’ll still have days (or weeks) where I haven’t accomplished as much as I’ve wanted to, but that’s no reason to curl up into the fetal position and give up, right?

I just gotta keep on keepin’ on.

How do you find motivation to stick your goals? What helps you keep going when you want to give up?