I’ve been craving peanut sauce lately. I don’t exactly know why – probably it’s one of those weird Whole30 cravings mentioned in the Whole30 timeline. My mouth just waters at the thought of the creamy, nutty sauce – and I’m not even wanting to eat it on anything – in my food fantasies I just eat it with a spoon…

…this may be one of the reasons I’ve been eating so much almond butter lately.

Unfortunately, peanuts are one of those pesky little legumes and therefore are verboten during the Whole30. For that matter, they aren’t paleo either, so I don’t ever eat them. (Again – weird Whole30 craving?)

So anyway. Instead of reaching for the almond butter and a spoon (something I rarely, if ever, used to do) I decided instead to make my own version of peanut sauce…with cashews! 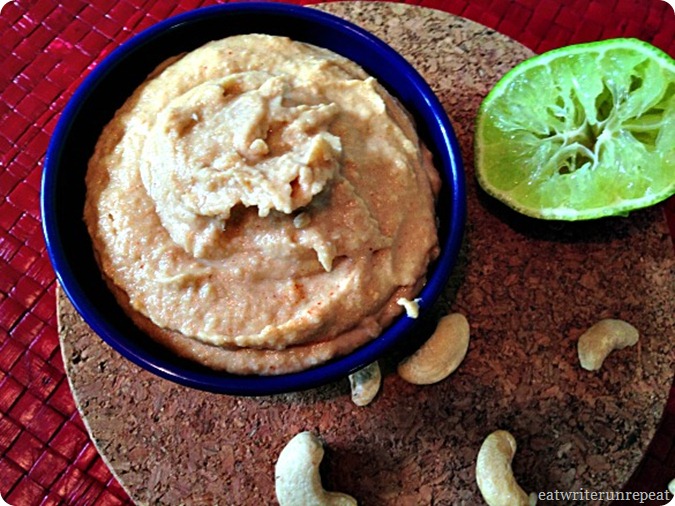 I personally love cashews, and I love cashew butter way more than almond butter, but sadly it’s like twice the cost and I’m cheap on a budget. Therefore it’s a treat in my life, not a staple. I did however have a bag of Trader Joe’s raw, unsalted cashews in my pantry so I figured how hard could it be? 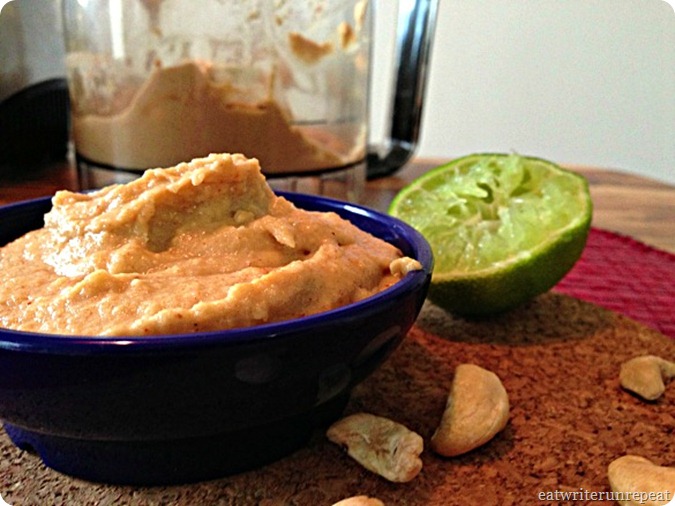 So, into my food processor went the cashews, some water, a bit of sesame oil and coconut aminos, minced garlic, lime juice, and a healthy dose of smoked paprika and cayenne pepper!

I took a bite of this creamy, spicy goodness just to taste it and immediately tried to dive face first into the bowl, it was that good. I then proceeded to ransack our kitchen to see what I could dip in my new favorite sauce. (Celery and red pepper slices? Awesome. Apples? Not so much – it was actually OK, but the sesame flavor was too overpowering for the subtle sweet of the apple.)

I had originally planned on using the cashew sauce as a marinade for chicken, but then I realized it’s a little thick and would probably be better suited as a dipping sauce. Then I thought about making chicken satay skewers, but A) we have no charcoal for the grill and B) I didn’t buy boneless chicken tenders, which would have been awesome – I bought chicken thighs. Bone in and skin on. I didn’t do this so much because I wanted the skin and bones (haha), but because it was like half the cost of boneless, skinless chicken. See above comment about being cheap.

So, I went back into my pantry and rummaged through for some ingredients for a marinade. I wanted a spicy Asian kung pao flavor, so I used coconut aminos and sesame oil (again), garlic, cayenne pepper, lime juice and ginger. So basically the same stuff I put in my cashew sauce, essentially.

I marinated my chicken for a couple of hours, tossed it into a baking dish at 425 degrees and what I pulled out of the oven 45 minutes later can only be described as heaven: 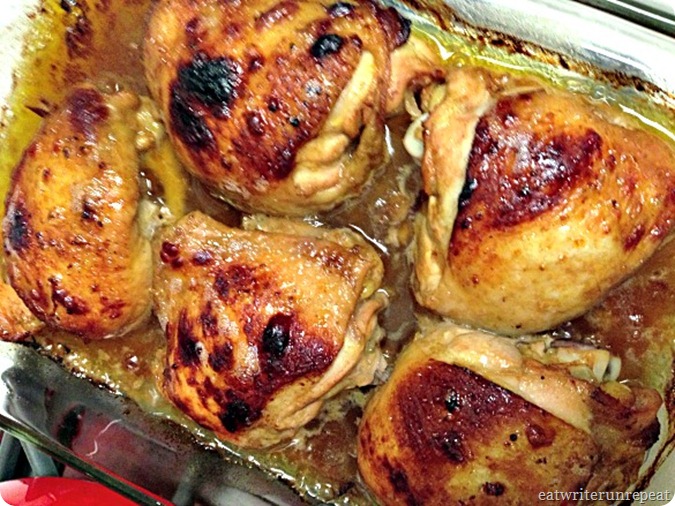 Seriously. Do you see how crispy and golden that skin is? I wanted to peel it off all the thighs and eat it all myself.

After I drowned it in spicy cashew sauce.

The Husband sauteed some veggies to go with our awesome crispy chicken, and we chowed down. 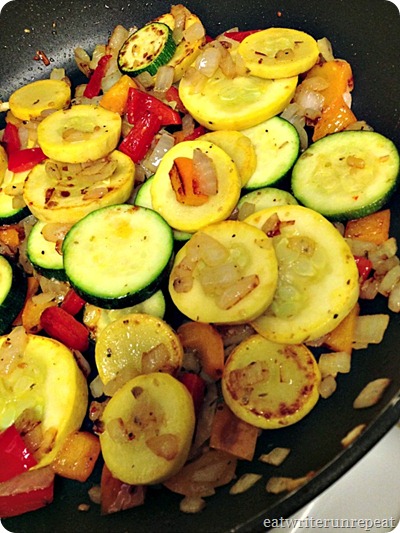 Perfect. The flavors of the chicken and sauce went so well together (probably because I used practically the same ingredients), the chicken was perfect, and the vegetables? Well, can you really mess up sauteed vegetables?

The best part? Packing up the leftovers for lunch the next day!

As usual, I’m linking up with Vegetarian Mamma for Gluten Free Friday! Hop over to her site for more gluten free recipes! 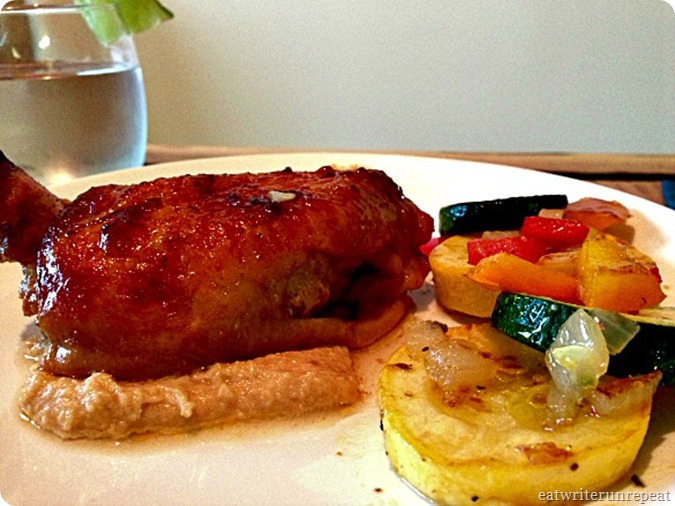 yields: 2-3 servings, depending on your hunger

2 pounds chicken thighs, preferably bone in and skin on

Add the chicken thighs to a bag and dump in all the marinade ingredients. Seal the bag and knead with your hands to ensure all the marinade is evenly distributed. Marinate chicken in fridge for 2-3 hours. When you’re ready to cook, preheat your oven to 425 degrees. Add the chicken to a baking dish and pour the remaining marinade on top. Bake for 45 minutes or until skin is delightfully golden and crispy and chicken is cooked through.

In a blender or food processor, add cashews, lime juice, cayenne pepper, paprika and garlic and pulse until coarsely chopped. Add water and continue to pulse until a paste forms. Slowly add sesame oil and coconut aminos and continue pulsing until all ingredients are combined. Sauce can be made ahead and stored in the refrigerator, covered, for about a week. 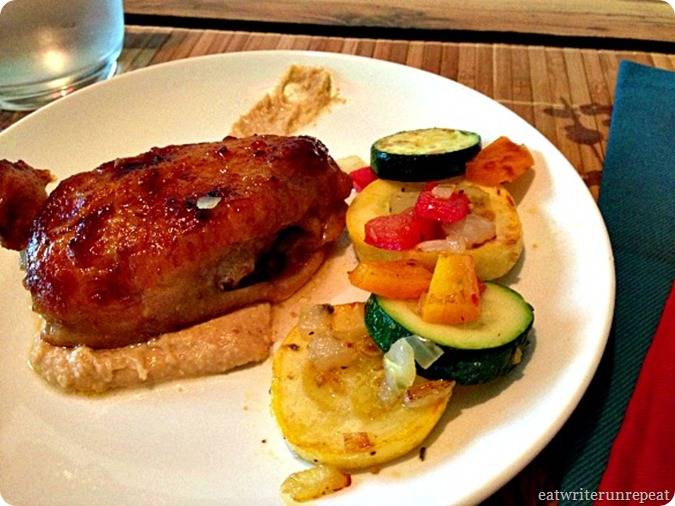