Two weeks into the  move and we’re still not completely finished. We did have a short reprieve once we finished putting all the stuff from our apartment away – but on Monday Kevin’s stuff was delivered from his place in California, which started another bout of moving, unpacking, rearranging and organizing.

The good news is that we are starting to create a home! 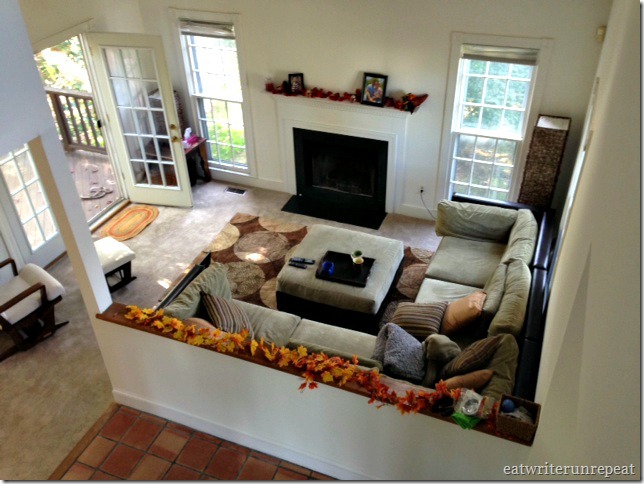 Kevin and I busted our butts on Monday to empty what we could of the PODS pod we rented for the move. I wish I would have thought to take a picture of the pod before we started to unpack – it was literally packed to the brim. It looked like the world’s most complicated game of Tetris. The upside is that we were able to unload everything except the heaviest items – we enlisted some help from the men in our Bible Study to come over on Tuesday and help with that. But everything else, including our sectional, most of Baby Bear’s bedroom set, and half of Kevin’s bedroom set (not to mention the boxes and boxes of various other household items) were taken out and (mostly) put away on Monday. Now we have a completely empty pod and a houseful of stuff that just needs to get put in its place and we’ll be done!

We survived the ordeal with only one minor setback:

Which, in the grand scheme of things, isn’t bad – as you can tell from the picture, it’s a patch job from some previous occurrence (I’m guessing the incident involved moving heavy furniture, as the scene of the crime is on the landing between staircases) and it’s an easy fix, so I’m not worried about it.

In the midst of all this, we’ve still had to eat, and given by the state of our kitchen, cooking something elaborate has been out of the question. Which is where I need to give a shout out to my second best friend: the dutch oven.

We all know that my first best friend is my crock pot.  What’s not to love? You throw some meat and veggies into the pot in the morning, turn it on high, and when you come home from work your house smells like heaven and dinner is served! But coming in a very close second is my dutch oven – particularly this one that I got as my one and only wedding present. It is pretty much perfect in every way, and it’s quite similar to the crock pot, except it doesn’t take as long to cook. In the case of this pot roast, it does require a bit more labor, but we still only used one pot, which is a win in my book! 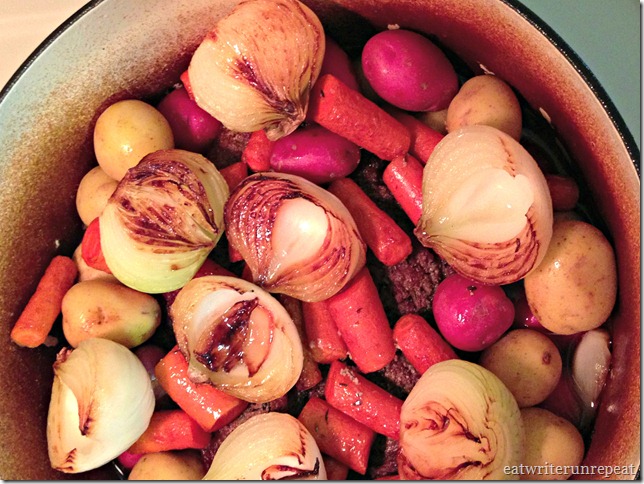 Out of all the quintessential comfort foods out there, pot roast is way up on the top of my list. I have very fond memories of my mom’s pot roast growing up – although admittedly, I liked the carrots and potatoes more than I liked the meat. But just the smell of the meal when I came home from school was enough to send me into food euphoria. I still get tingles when I think of it.

This pot roast is a bit different than the one I grew up eating. For one thing, my mom used to cook it in a covered roasting pan in the oven, while Kevin and I use the dutch oven on the stovetop. Also, we use copious amounts of red wine in our version, whereas my parents substituted beef stock. But however you prepare it, sitting down at the table with a steaming bowl of pot roast while it’s pouring rain and freezing outside pretty much makes everything better. 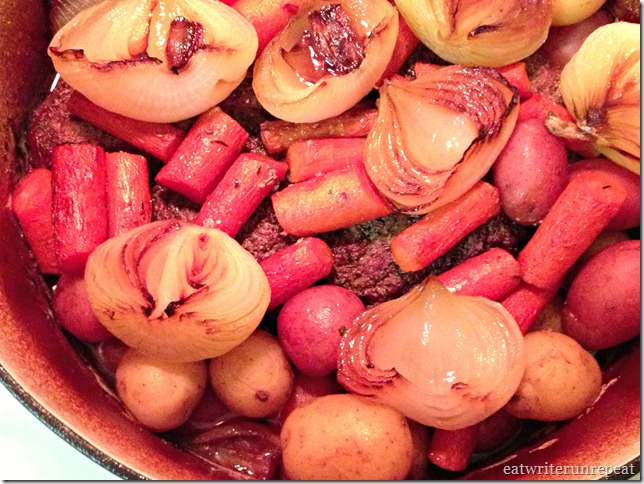 Heat 1 tablespoon coconut oil in a dutch oven over high heat. Add your onions, cut side down, to the pot and brown, about five to seven minutes. Set aside. In the same pan add your carrots and cook another five minutes, until carrots start to caramelize. Set aside. Meanwhile, season your roast with salt and pepper. If necessary, add another tablespoon coconut oil to the pan and sear your meat on all sides before removing from pan. Deglaze the pan with one cut red wine, using a wooden spoon to scrape off the brown bits. Return the meat to the pan and add another two cups wine (about 3/4 of the bottle total). Drink the remaining glass of wine if desired. Season with herbs de provence spice blend, cover, and cook for approximately two hours. Add the potatoes and carrots to the pan and cook an additional one hour.