Happy Day after Halloween! Did you get a lot of candy? I was hoping we’d give away a lot more, but trick or treating was a little slow in our neighborhood due to drizzle…so guess who gets the leftovers??

This is what happens when you go through a fall recipe phase where everything you make is either orange or brown or some combination of the two.

You make something green!

Ok so technically this is another brown recipe with a little green added in, but it totally counts. Um, except let’s ignore the chocolate chips, shall we?

Suffice to say that my body has been craving nutrients in the form of green vegetables lately. Which may explain why Kevin and I went to Costco the other night and spent WAY too much money on bulk produce. (WAY too much. Like, I’m still reeling.) The upside is we’ve been juicing a lot lately, not to mention I’ve been packing lots of salads for lunch, so hopefully those nutrients I’ve been craving will kick in soon!

And although zucchini isn’t in season and I feel like I’m cheating on fall by sharing a spring-like recipe, this needed to happen. Seriously.

I guess you could make the argument that if I really needed the green vegetables I could have just made zucchini as a side dish to a real dinner instead of adding it to a sweet bread and throwing in chocolate chips…to which I’d say you’d be totally right.

But this probably definitely tastes better. 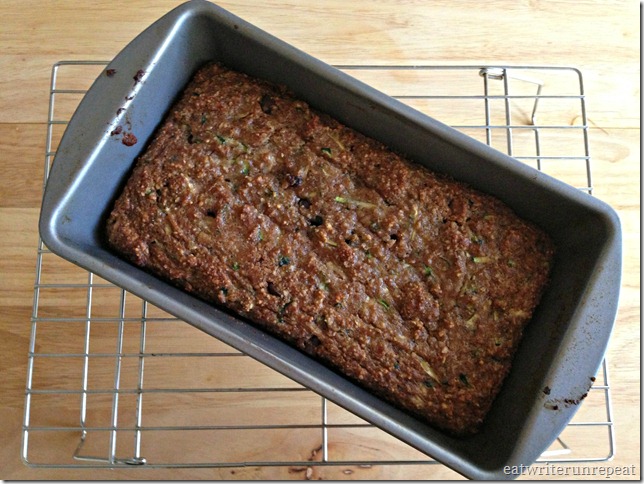 I mean, Kevin came home and ate three pieces in three seconds, so it has to be good, right?

Or it could have been that he was really hungry, which could also very well (and probably was) the case.

It’s a good idea to remove the excess water from your zucchini before you use it in this recipe. To do, place the shredded zucchini in the center of a clean dishtowel and wrap the ends around before wringing out the towel. This removes the extra moisture and will result in your bread not being super soggy. (It will still be more moist than regular bread, but not mushy.)

Preheat your oven to 350. In a bowl, combine all dry ingredients (except your chocolate chips. Then, add the wet ingredients and stir to combine. Fold in chocolate chips. Pour mixture into an ungreased bread pan and bake for about 60 minutes, or until a toothpick comes out clean.

Now if you’ll excuse me, I have ten pounds of leftover Halloween candy to eat.