You know that phrase, “Winner winner chicken dinner?” I hate that phrase actually, I think it’s kind of dumb and I don’t really understand the point of it, BUT.

This dinner? Was a total winner. Excuse the cheesy rhyming, it was completely unintentional.

But seriously. You’re going to want to stop whatever you’re doing and go make this dinner right now. Well, after you’ve finished reading this post, of course! The funny thing is that it was, as usual, the result of Kevin and I just going through our absolutely random refrigerator contents to see what we could come up with. Why is it that our unplanned, thrown-together-at-the-last-minute meals always end up being the best ones?

To break it down for you, we made pan fried chicken thighs, collard greens with bacon, and carrot and parsnip fries with roasted garlic. Pretty random, right? I really wanted to make chicken thighs in the cast iron skillet I took possession of once I married Kevin and his stuff arrived here from California, we had collard greens that needed to get used up, and I made the parsnip and carrot fries because I bought parsnips at the grocery store with no earthly idea if I’d even like them so I added them to the carrots. And I tossed in the garlic cloves at the last minute because I love garlic and I don’t really need any more reason than that.

I can’t even explain how good this meal turned out to be. The chicken was perfectly crispy, the collard greens were seriously out of this world, and the carrot and parsnip fries added a very particular sweet yet tangy flavor to counterbalance the saltiness of the chicken, bacon, and greens.

The best part? There’s no real “recipe” to follow – it’s pretty much whatever you feel like doing! 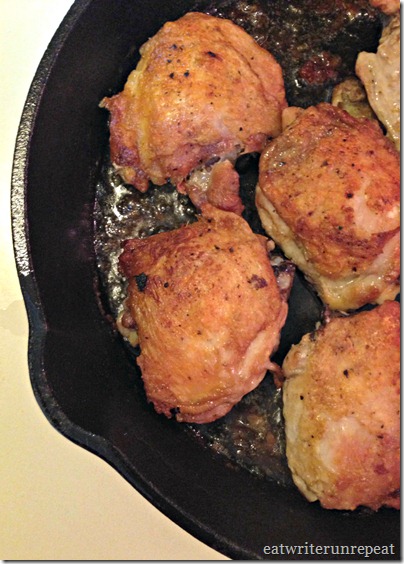 We kept the chicken simple – I seasoned bone-in, skin-on chicken thighs with some salt and pepper and cooked them in a cast iron skillet, skin side down, for about 15 minutes on medium-high heat before moving the entire skillet to the oven (475 degrees) and cooking for an additional 12 minutes. Then I flipped the chicken and cooked for another 5 minutes or so, until the other side of the chicken skin was brown and crispy and the chicken was cooked through. Beautiful. 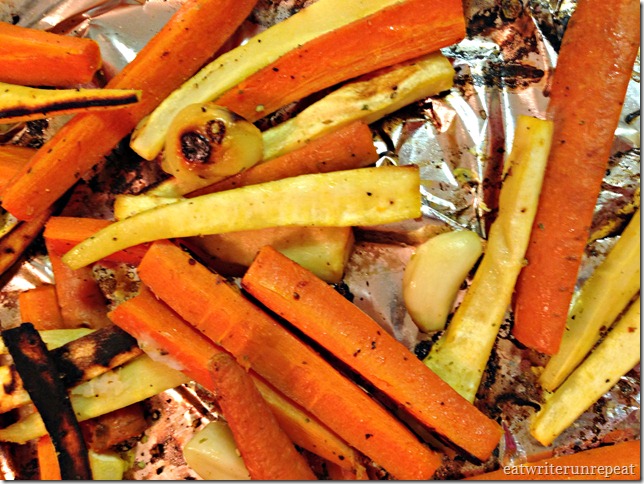 The parsnip and carrot fries with roasted garlic were made the same way I make any roasted vegetables, I sliced the parsnips and carrots and threw them in a bowl with the whole garlic cloves, some olive oil, salt, and pepper, and spread them on a foil covered baking sheet. I cooked them alongside the chicken for about 15-20 minutes, flipping once, until they were brown and crisp. Normally I’d cook the vegetables for about 30 minutes at 350 degrees, but it took less time because the oven was so hot for the chicken. Just an FYI there. 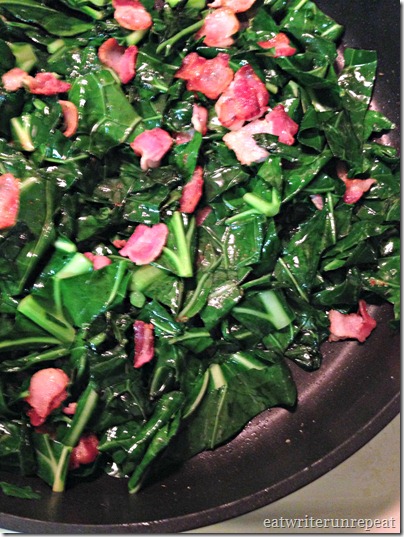 The collard greens were, believe it or not, my favorite part of the meal. I’ve actually only had collard greens once before – at a BBQ restaurant, and to be perfectly honest they were only so-so. I think they were overcooked and I’m pretty sure they weren’t served with delicious bacon pieces. All we did for these was dice some slices of uncured apple smoked bacon and cook them in a skillet before adding the chopped collard greens and cooking down for about 7-10 minutes. Isn’t that the most beautiful shade of green you’ve ever seen?

Gaah. So delicious. And on the difficulty scale (1 being crock pot easy and 5 being boeuf bourguignon difficult), this recipe comes in at about a 2.5-3. Not because it’s all that difficult, but you do need to pay attention to each different item so it doesn’t burn. But all that aside, it was pretty darned easy for a Wednesday night dinner! And it’s something I definitely would NOT be ashamed to serve to company.

I love easy yet elegant dinners, don’t you? 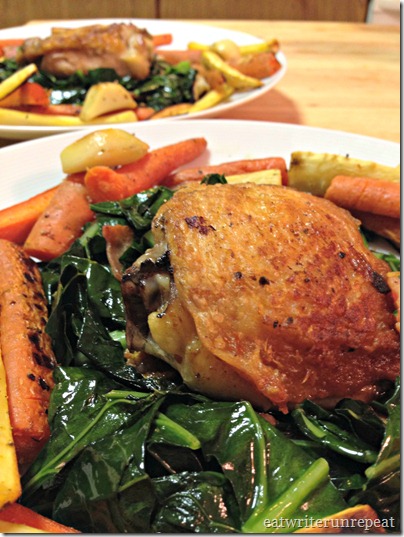 I want to eat the whole dinner over again. Is that too weird?

One thought on “Best Dinner Ever”