I had one goal for this past weekend: to buy Christmas tree and decorate our house for the holidays.

To be honest I would have been perfectly fine picking out a Christmas tree from the lot at Home Depot like Kevin and I did last year, but Kevin mentioned cutting our own tree this year, so I hopped online to search for some places. We came upon Ticonderoga Farms, a pretty awesome farm located about an hour outside of DC. Not only do they have cut-your-own Christmas trees (they also have pre-cut), but they had an awesome play area for kids – complete with slides, a huge trampoline/bounce house thing, and playsets. 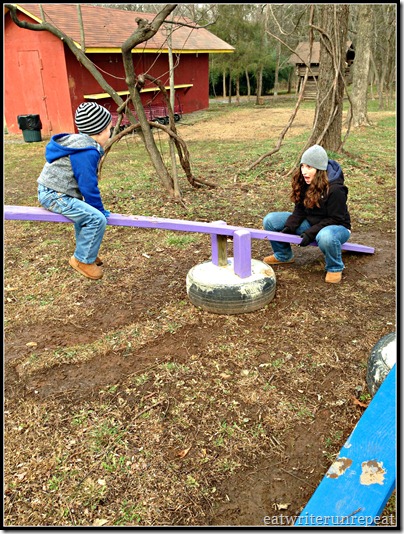 I haven’t been on a seesaw in forever.

They also had some bonfires going, as well as a snack stand for hot drinks and even a wine tasting set up for the adults! (For a small fee of course). We had a blast running around in the freezing cold for a while before we made it over to the trees. Unfortunately we didn’t find a tree we really loved, not even one of their pre-cut trees, so we decided to stop by Cox Farms on the way home to check out their tree selection. Cox Farms only has pre-cut trees, but we were pretty cold by then and decided that buying a pre-cut wasn’t such a bad idea. 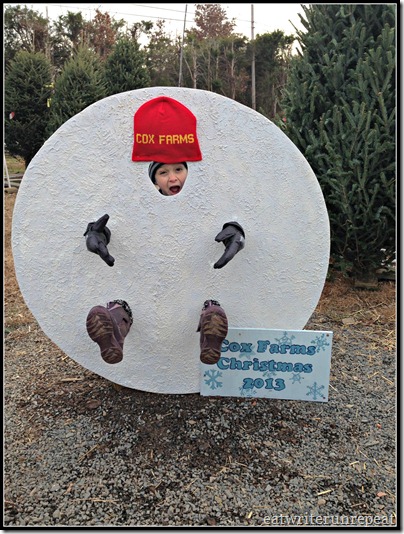 I couldn’t resist taking this picture – how adorable is he?!

The best part about Cox Farms is that they have Concolor Fir Trees! My family has been getting concolor firs for years and I love them. They look more full without being too heavy (does that even make sense?), and the needles are long but sturdy enough to hold ornaments. Last year Kevin and I got a Fraser Fir from Home Depot, but once I saw the Concolor at Cox it was game on. We picked out a tree in relatively short time and headed back home to start decorating – my favorite part! 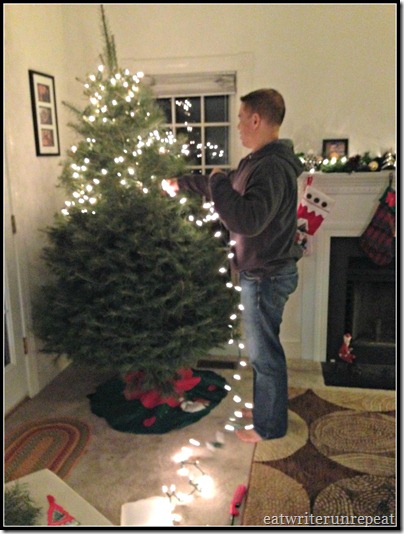 Kevin started with lights, which always seems to be a huge production. We can’t ever remember which way to start the lights – bottom up, or top down? This year we went with top down and it seemed to work pretty well. Are we the only ones who have this issue?

We let Baby Bear hang the first ornament before we all dove in. We also let him put on the star, which was hilarious because Kevin lifted him up to put the star on the tree, only the top of our tree was apparently too flimsy, and the star and the branch it was on totally dropped down a la Charlie Brown. It would have been hilarious, but we fixed it! 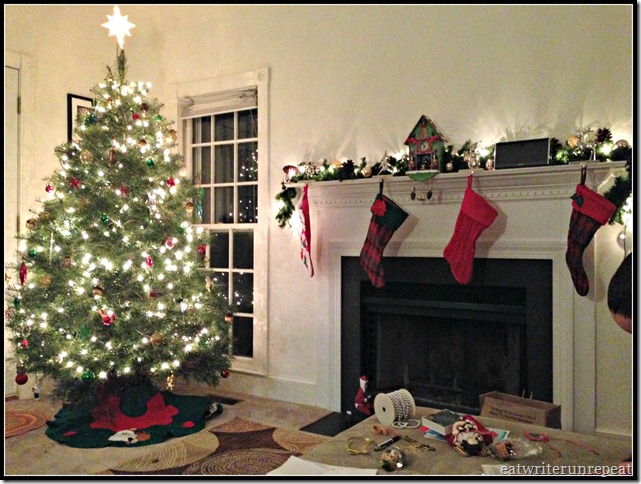 We weren’t sure how tall of a tree to get because we couldn’t remember how high our ceiling started to slope, so we stuck with a  7 foot. Once we got home I wished we would have gotten a taller one – we have plenty of room! But then again we probably wouldn’t have been able to decorate the whole thing, so it was probably smart we went with what we knew. We ended up getting the tree and the mantel decorated on Saturday before we called it a night; we saved the rest for Sunday and even a little on Monday. I love the way our house looks – I just want to sit on the couch with a cup of coffee and stare at the lights until Christmas! It was a perfect Saturday – time spent with my two best guys, lots of fun, and a beautifully festive house to top it all off! Yay Christmas!

2 thoughts on “Christmas Trees and Decorating”