Remember how on Friday I said we had nothing in our fridge?

Yeah, it’s that bad. Unfortunately, making a salad with veggies and a couple of strips of bacon on the side wasn’t going to fill me up before my weekend trip to the grocery store (we don’t even have eggs! That never happens!), so I had to go to Plan B: Pre-Made Paleo.

I first found Pre-Made Paleo in December, when I was browsing the Whole30 website for some tips before we started this Whole30. Pre-Made Paleo offers 100% Whole30 compliant meals and snacks, individually packaged and shipped frozen so you have compliant meals on hand for when you need them. One of their offers at the time was an emergency preparedness package, which included enough food for five full days: five breakfasts, ten interchangeable lunch and dinner options, and five portions of trail mix as emergency snacks, but I enjoy cooking and meal planning and didn’t need that many options on hand, so I opted to purchase their 2 day package instead. (I ended up getting two 2 day packages, one for me and one for Kevin). My order arrived in a styrofoam cooler and was packaged in dry ice. And side note: while I know you’re not supposed to touch dry ice with your bare hands, it didn’t occur to me that there would be dry ice residue on the individual packages…which led me to get slight dry ice burns on my hands. I don’t recommend this.

Our total delivery, less the two meals I ate before deciding to write this post: 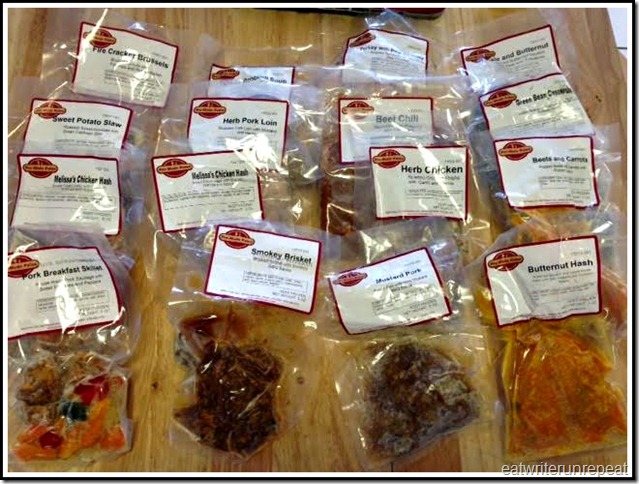 As you can see you get a mix of protein entrees, vegetable sides, and a few entrees (like the Beef Chili or the Turkey Broccoli soup) that are one-pot meals. You have the option of a 5oz or 8oz protein portion, too – I ordered the 5oz. Not a bad deal, especially in an emergency. All you do is defrost your meal either in the refrigerator or in the microwave, then you dump the food into a skillet with some water or cooking fat, cover and cook for 3-5 minutes to heat through and you’re done! The meals may not look like very much once they are cooked, but it works!

Breakfast, 0800: Pre-Made Paleo’s turkey breakfast skillet, which was homemade turkey sausage, bell peppers, onions and sweet potatoes. Again, it’s not the prettiest thing to ever grace my plate, but it tasted good and filled me up for my trip to the grocery store!

Lunch, 1400/1430: I literally spent all day in the kitchen prepping food for the upcoming week, so I was shocked when I looked up to find that it was already 1400 and I hadn’t eaten! I scarfed down a chicken thigh and some guacamole and continued cooking, until about 1430 when The Husband and I split a honeybel orange as a snack. Have you had a honeybel yet? They are FANTASTIC. It’s a super sweet cross between a tangerine and a grapefruit…and have I mentioned they are super sweet?

Dinner, 1815: One of the things I bought at the grocery store was a three pound family pack of ground turkey – honestly, sometimes I’m embarrassed at the amount of food I buy for two people for one week! But then I remember that I buy everything fresh – and it’s produce and meat, and I don’t feel as bad. Anyway, I took my three pounds of turkey and made the biggest turkey sage meatloaf you’ve ever seen. I’m guessing. At least, it was biggest meatloaf I’ve ever seen! On the side I made a sweet potato hash with bacon, kale, and pecans – it’s a recipe I’ve wanted to create after eating something similar at a restaurant with Kevin – and I think I came pretty close! (Note: this side dish would be equally awesome topped with two eggs and served for breakfast.)

My Day 17 Overall: Still feeling good! One thing that’s helped me is our food prep – it’s definitely easier when you have a ton of protein cooked and ready to go in the fridge for the week ahead! For this week I ended up cooking four chicken breasts (two in a Moroccan seasoning, two seasoned with Herbes de Provence), six homemade beef sliders (they were supposed to be regular burgers but they cooked down too much), two pounds of ground beef seasoned with onions, parsley and chili powder, ten hard boiled eggs, homemade mayo, and of course the turkey meatloaf, of which we’ll have leftovers for days. A solid win for the day!