I was 22 years old in 2004. I was one month away from graduating college and at the time my biggest obstacles in life were which outfit to wear to the bar and stressing over the fact that the object of my affection didn’t return my affection. My life revolved around shopping, working, going to class, and spending time with my friends. On that Sunday morning in April I most likely slept in, maybe went to church, worked an afternoon shift at my job, and I probably spent part of the day whining about not wanting to go to class the next day.

I had no idea that on that same day halfway across the world, my future husband and several hundred other American men (most of them either my age or younger – my husband tells me the most of the junior Marines were in the graduating high school class of 2003) were dealing with an entirely different obstacle – they were literally fighting for their lives.

Thirty-four of those men wouldn’t make it home.

Most people remember hearing about the fighting in Fallujah, an Iraqi city just west of Baghdad. But many people don’t remember – or even have any knowledge of – the nearby town of Ar-Ramadi. On the morning of 06 April 2004 as the fighting raged on in Fallujah, Iraqi insurgents set off a series of coordinated attacks on the unsuspecting Marine battalion stationed in Ramadi. 12 Marines lost their lives in that single day. Over the next three days of fighting, however, those Marines fought back – and hard – taking out scores of insurgents. It was quoted that by the third day of fighting, Marines were walking through the streets with bullhorns and megaphones, taunting the insurgents and begging them to come out and fight. Not surprisingly, there were no volunteers. It is said that in four days of fighting this single Marine battalion took out 250 insurgents.

Last weekend I had the honor of meeting some of these men when they gathered for the 10 year anniversary of the Battle of Ramadi at Camp Pendleton in Califoria. I watched as they exchanged hugs and stories, pictures and memories. Some of them hadn’t seen each other in almost ten years but it was as if they’d never been apart. I was able to share in their joy, but I also saw their pain – the pain of what they saw and experienced, the pain of losing men they considered brothers. I heard at the memorial service that the average age of a squad leader in Iraq was twenty-one years old. Twenty-one years old and leading men in battle. Most of the twenty-one year olds I knew (myself included) could barely manage their checking accounts, much less lead a squad of soldiers in battle. It’s a sobering thought, the responsibility that these men held on their young shoulders.

When we arrived on base we were greeted by a stretch of Marines two miles long – lining the entire road from the base gate to the site of the memorial. For every man lost in Ramadi another soldier stood in his place and laid a purple heart on the 2/4 memorial before snapping to attention and delivering a deliberately slow salute. It was emotional. It was heartbreaking. It was humbling and awe-inspiring.

I left Camp Pendleton a different person than when I arrived. Until I married Kevin I had no personal connection to the War on Terror and I will be the first to admit I was extremely ignorant to what the men and women who served and fought have gone through. Being there and hearing their stories and seeing their faces and watching their interactions gave me a new perspective on the War – it gave it a face, a persona. And I know that we, America, can never be thankful or grateful enough for what they have done for us – for the freedom we have because of them.

So I would like to say THANK YOU to the men and women who have served, are serving, and will continue to serve our country so that I can live a life of freedom. Words are not enough.

And to the 34 Magnificent Bastards that didn’t make it home from Ramadi: you are not, and will not be forgotten.

The following is a facebook post by Jonathan Hancock, one of the 2/4 Marines who served at Ramadi and attended the Reunion/Anniversary. He gave me permission to post it here. I think it speaks for itself.

After leaving California and returning to Maryland following the 2ND BN 4 MAR MAGNIFICENT BASTARDS 10 year anniversary and memorial service I am humbled. Years ago, We walked away from each other. Some of us didn’t get to say our goodbyes when we returned to the states. We parted ways because our mandatory time concluded. We either stayed in, or we got out. Either way. We left and pushed ourselves into new lives. We carried out, into the world, our burdens, our memories (good and bad), our cries, and our laughter. But, we did this alone. We walked alone through a world of hustle and bustle. We saw people and never comprehended how we would ever fit in. We tried, and god dammit, we tried our hardest to assimilate; to move on. Our time for healing started much later. We had to go get drunk, get in trouble with the law, aspire to be great, become great, succeed over insurmountable odds, and find our way through something new and completely foreign; life. Returning to where we all met under the screams of senior marines, we were the kings this weekend. We met under a cloudless blue sky with the breeze of Valhalla drying our tears and we were once again united. We came to honor our dead and so much more happened. Men met and hugged. There was not one handshake this weekend. Brothers of a long lost story descended upon San Clemente and lay waste in the only way we ever could. Together. Company rivalries, albeit fun, were gone and a unified arm reached out to hold and strengthen any man who marched into Ar Ramadi. I tear as I write this and I know that is because the healing that we felt, the solidarity, the oneness with each other was so much more prevalent than any of us could imagine. The men of 2/4 have never been glory seekers. And while our videos of marines lining the road we travelled on go viral, we remember that we were called upon to hold, and fight. We fought with vigor and crushed an enemy that had no idea what hell they had just unleashed. I am so proud of every one of you. I am proud to call myself a bastard and I am especially proud of our fallen. Men who will never have a voice again. But damned if their memories don’t live on through our stories. Our stories become their voices and Our dead will have a voice until I take my last breath. Thank you to 2/4 for the ceremony, your attention to such a detail inside OIF not only validates us but it helps us never to forget that the marines will go on for years carrying the stories of war-fighters past. I love all of you and will always hold a special and large space in my heart for 2/4. 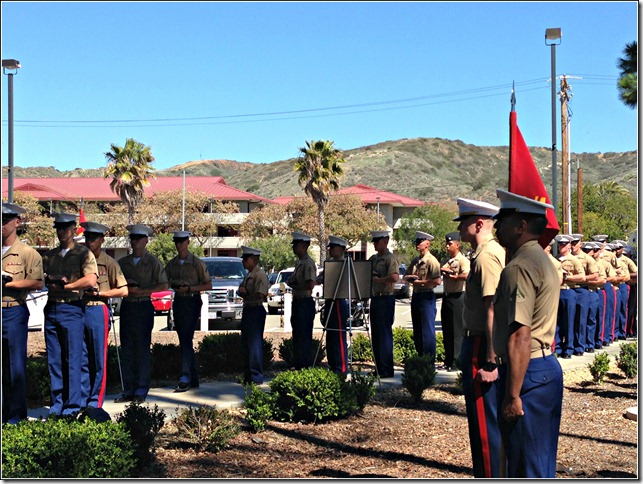 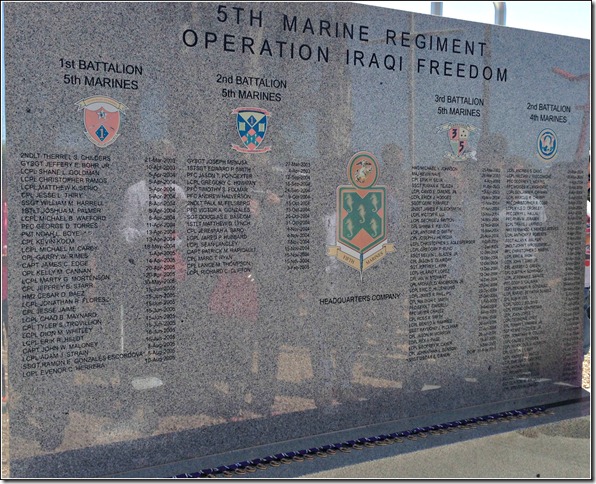 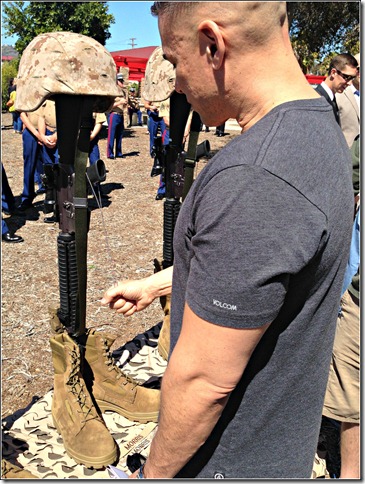