When it comes to international travel, my tastes run more towards Eastern Europe than anywhere else. I studied several languages in high school and college, to include Russian, and I spent the first two years of my overseas career living in he gorgeous utopic country of Slovenia. Needless to say, the Balkans are near and dear to my heart. I’ve done extensive travel throughout Europe and I’ve seen my share of the Middle East, but interestingly enough the one language I’ve never studied is Spanish, nor have I traveled to any Latin American countries. I’ve recently decided that I need to remedy this, for one reason alone: the food. 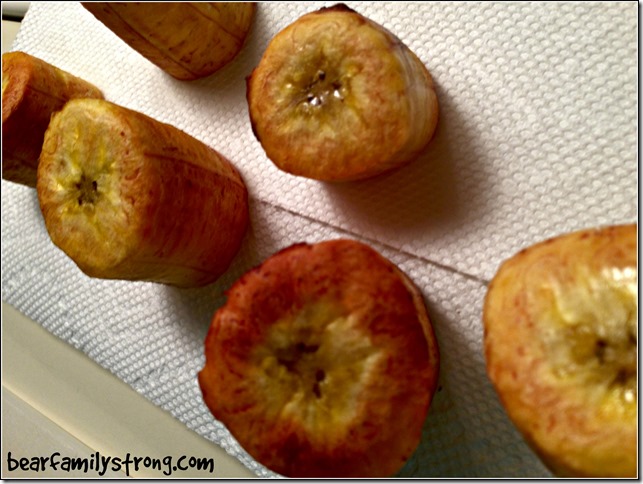 Oh, the food. Cuban sandwiches. Plantanos. Tostones. Mofongo. With the exception of the cuban sandwich I’d never before heard of any of these exotic dishes until recently, when I was introduced to a friend of my husband who hails from Puerto Rico. Just listening to him talk about the food makes my mouth water! It also made me want to try some of these dishes he was talking about, particularly the ones that involved plantains.

I can’t remember the first time I ever tried plantains, but boy do I love them! I shared a recipe for sweet fried plantains very early on, as you can tell my the horrible photography in that post. Plantains can be sweet or savory, depending on the ripeness of the plantain and how they are prepared. And they are ridiculously cheap – the grocery store where I do the majority of my shopping sells them for 2/$1.00, and ALDI sells them for .35 each! Major win.

Having already tried my hand at sweet fried plantains and savory fried plantains, I decided to try my hand at Tostones. According to the all-knowing Wikipedia, the word comes from the spanish verb tostar, which means “to toast”. Literally, they are plantain slices that are fried once, smashed thin, and then fried again.  Kevin and I both tried our hand at smashing the plantains – apparently there is a special tool called a tostonera, which is used to smash the plantains thin, but we just used the bottom side of a regular old plate and it worked just fine – and we found out that while my plantains tended to end up on the thicker side, Kevin mashed his a lot thinner, so they turned out crispier and more like chips. Interestingly enough, once they were fried up we found out each of us liked the other’s way better! 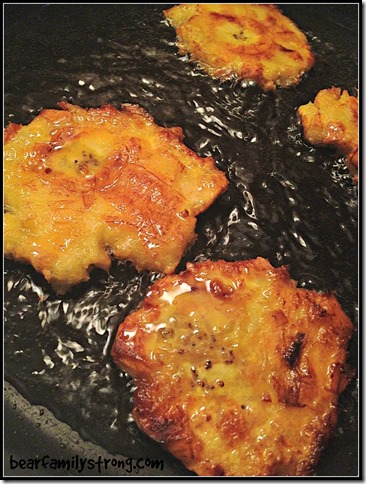 These make a great snack just eaten like chips, but they taste even better when topped with pork carnitas, green salsa, and some avocado pieces. Yum.

2-3 unripe (green) plantains, peeled and cut into one inch pieces

Heat a couple of tablespoons of olive oil in a deep skillet. You don’t want to completely cover the plantains in oil, you just want a thin layer on the pan. Once the oil is hot, fry the plantain pieces for a few minutes, making sure each side is nicely browned. Set aside on paper towels to dry, but don’t turn off your pan of oil. Using the bottom of a plate or other flat, sturdy object, smash the plantain with decent force – you want a thin plantain slice. NOTE: I would recommend using a metal flipper to peel the plantain from the plate; otherwise it might fall apart. Dip the plantain into the bowl of water and set on paper towel to dry slightly. (This keeps the plantains crispy, and maintains their color during frying.) Then re-fry the plantains in your hot oil for about two minutes on each side. Blot the tostones on another paper towel, sprinkle liberally with salt, and serve immediately. 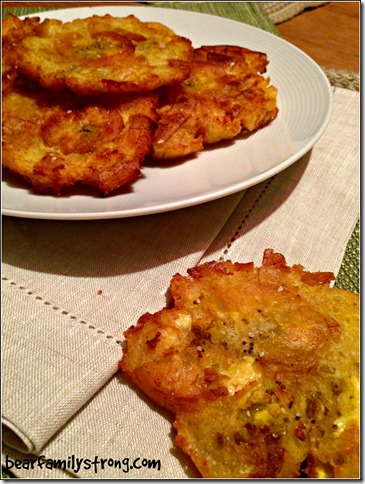