I’m a little squirmy about labeling this “recipe” Whole30 because of a little thing Dallas and Melissa Hartwig (co-creators of The Whole30) call “Sex with your Pants on (SWYPO).” Basically, the principle of the Whole30 is to reset your body by not eating any grains, legumes, dairy, alcohol, or sugar for 30 days. Most of these are pretty simple, with the exception of one: sugar. On the Whole30, you aren’t allowed any sugar at all – to include things like honey, agave nectar, etc. We all have that dreaded Sugar Dragon – you know the guy, that little sneak who may or may not send you down to the kitchen at 0200 for a couple spoonfuls of Ben and Jerry’s. “Slaying the Sugar Dragon” is one of the hardest things to do – whether you’re doing a Whole30 or not. I could go on and on about the negative effects of sugar – but I’ll spare you.

For the full explanation of SWYPO, refer to this article. Essentially, it can be summed up like this. Eating something that resembles a junk food – even if it’s made with Whole30 approved or natural ingredients – can still sometimes serve as a junk food. For example, take a look at these recipes:

It’s true that these recipes all include paleo approved ingredients, but it’s still junk food no matter how you slice it. And there’s nothing wrong with eating any of these treats as long as you realize that you’re still eating junk food, albeit a healthier version. If you eat something like this every night, chances are that you have not slayed your Sugar Dragon. You’re just being nicer to him.

However, the line between what is or is not SWYPO is fairly blurred, which Melissa Hartwig explains in this Instagram post:

Is this “apple pie snack mix” #SWYPO? TL;DR: This is one of those grey areas in which I demand that you take some personal responsibility. The long version:

Technically, this combination of foods is #Whole30 compliant. There may even be specific situations in which this snack mix is appropriate for your Whole30, like a kid’s birthday party or dessert for a special dinner. If you’ve done the Whole30 enough (and live Whole30-ish in between), you may find a conscious, deliberate choice like this during your program is actually fine, and won’t wake your Sugar Dragon.

But this is not most people, and likely not your context. Remember the Whole30 is about changing your habits and your emotional relationship with food. Including technically-approved-but-not-at-all-encouraged foods to satisfy your Sugar or Snack Dragon or fill an emotional hole during your program is not helping your cause.

So why am I not ruling this explicitly off-limits during the Whole30? Some of you think I’m just going soft, and that the “old Melissa” would have banned snacks like this outright. That may have been true. But I would have been wrong.

It’s not my job to dictate every nuance of your Whole30. I can’t do it for you, and I wouldn’t want to. There are grey areas in everything, including the Whole30. And it’s your job to step in where the official rules leave off, and decide what kind of an experience you want to have.

Do you want to feed your Sugar Dragon with technically compliant treats for 30 days because it makes the program easier? Then go do that… and own the consequences. Do you want me to tell you, “Don’t eat that, it’s not right for you, you know this?” If you tweet at me, I might… but you already know the answer. You’re all big boys and girls, and it’s not going soft to say, “Here are my recommendations; now it’s up to you as grown-up people to make the right decision.”

In summary, it’s YOUR program. OWN IT. #melissarants #toughlove #heavyonthelove

This recipe is from @popular_paleo, who has an excellent handle on both the Whole30 and her Sugar Dragon, gets that “context matters,” and encourages you to eat responsibly.

Well, that’s how I feel about this Apple Pie “recipe”. I’ve completed several successful Whole30’s and I don’t tend to have a huge sweet tooth in general, and so for me this is perfectly acceptable as a snack – it doesn’t send me screaming down the aisles of the grocery store for a Snickers bar, but it does satisfy me when I want a little something sweet. Plus, there isn’t any added sugar to it and as far as fruit goes, a green apple is one of your better options. Really the only reason I’m calling it Apple Pie is because that’s what the smell reminds me of. 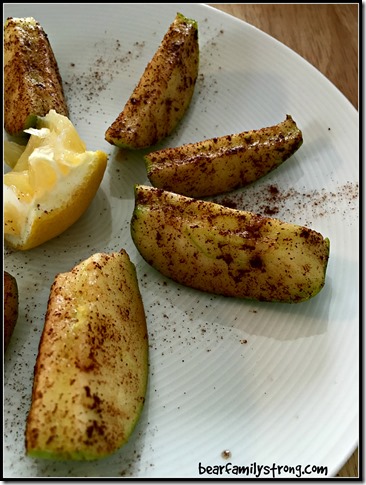 Core and slice your apple. Sprinkle with cinnamon and drizzle with lemon juice. To really experience the Apple Pie smell, add your apple slices to a ziplock baggie, squirt in the lemon and add your cinnamon, and then shake like crazy.