When white potatoes became a Whole30 approved food, there were celebrations heard worldwide. In my house, however, things hummed along as usual. Aside from fast food french fries and the occasional baked potato, we really don’t eat white potatoes that often, even before we got into the Whole30 and found out they weren’t approved on the meal plan. There isn’t anything wrong with white potatoes; but for my husband and I – sweet potatoes worked just as well, if not better.

Then a few weeks ago I bought a bag of russet potatoes with a plan to make stuffed baked potatoes as something different for dinner or packed lunches. And then I took it one step farther and decided instead of baked potatoes with our steaks, I’d slice the potatoes into thick wedges and bake them in the oven. 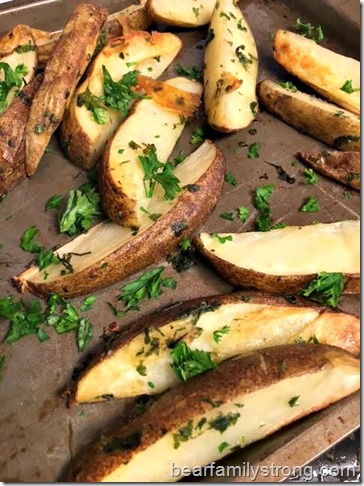 Although I adore sweet potato fries, I’ve found that my body doesn’t tolerate sugar well – even the natural sugar found in fruits and vegetables. As a result, I’ve tried to cut down the amount of sugar I’m eating and so sweet potato fries (and sweet potatoes in general) haven’t made much of an appearance in our diet lately. These oven baked potato wedges have been an excellent substitute..

The key to perfectly crisped wedges is to watch them carefully and turn them regularly. The first time I made them I didn’t add enough olive oil and they started sticking to my baking sheet. Added to that, I didn’t flip them soon enough and one side of each wedge ended up pretty crisp (as in almost black and stuck to the pan), while the other side was almost underdone. Fortunately for me, I thought they tasted great, but they were so much better when cooked to a nice golden brown – crunchy on the outside with a nice soft potato middle. Delicious.

The other nice thing with regular white potato wedges (as opposed to sweet potato fries, at least in my book) is that you can experiment with your seasonings. Usually I keep these plain, with just a shake of pink sea salt, but I’ve also tried garlic salt and fresh parsley, a dusting of chipotle chili powder, and one time I even used a mixture of turmeric and smoked paprika. Obviously you can be just as creative with sweet potatoes, but I personally prefer mine plain.