Because I had off from work on Monday and Tuesday (Fall break for school – hooray for annual leave days!), I decided that instead of going to the gym, I’d simply do a workout in the comfort of my own home. We are blessed with a screened in porch at home so although it was still pretty chilly, at least I had a roof over my head.

The way this WOD works is pretty simple – I did 10 burpees and 1 tater, then 9 burpees and 2 taters, 8 burpees/3 taters…all the way until I finished with 1 burpee and 10 taters. For those of you who are picturing me doing a couple burpees and then snacking on some potatoes, let me show you what a “tater” is when it comes to crossfit:

Basically, it’s a kettlebell swing followed by a front squat. I used a 25 pound kettlebell for mine – needless to say, by round 6 they really start to suck.

I forgot to start my timer for this WOD because in all honesty, I was wiped out from the double unders, so I have no idea how long this workout took me to complete. And in full disclosure, the original plan was to finish with another tabata of double unders, but the only thing I could do after finishing the burpee/tater mash-up was lay prostrate on the floor. So instead I did some stretching and called it a day.

Sadly my husband and I had to cancel our Crossfit membership – we couldn’t manage to get to any of the scheduled classes due to some changes in our personal lives, and it was too expensive to maintain for the few times we would actually go. Instead, we joined a “regular” gym which is a short drive from our house, offers very cheap membership options, and (probably best of all) has a “Kids Club” so we can take Baby Bear with us!

That said, I do miss my Crossfit workouts and so I’ve decided to keep up with doing WODs 2-3 times a week, just to track progress and keep up my stamina. Our gym is limited in free weights and I certainly don’t feel comfortable doing any of the Olympic lifts without a spotter, so my WODs will for the most part be kept limited to body weight, dumbbells, and plates.

Because Crossfit WODs are typically short bursts of high impact activity, I’ll also be including the rest of my workout each time I post. Credit for today’s (well, actually I did this WOD yesterday, hence the title) WOD goes to my dearly beloved Crossfit gym!

For the past year or so (probably longer), the Husband and I have been struggling with our health. As much as I even hate admitting it out loud – or on paper – we needed help, and we knew it.

When we look back, it’s easy to see where things went south. We’ve both been pretty healthy people – when Kevin was living in California he worked out all the time. Health and fitness were a priority to him – both for his personal life and in his profession.

For me – I started working out fairly regularly when I first moved overseas. I’ve had ups and downs, but I always maintained a somewhat regular fitness routine. And I prided myself on how I ate. I’ve been on a mostly Paleo diet for a couple of years, I completed several Whole30s…it was a part of who I was. Even before I decided to go Paleo, I’ve always been the one in my family who chose vegetables over dessert. 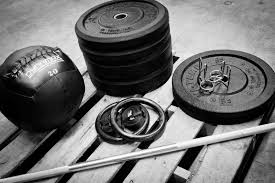 However, a few months after we got married we hit a series of trials in our personal life that led to a lot of stress. When added to the extreme Virginia winters, all we wanted to do – all we did – was stay home and feel sorry for ourselves, or go out to eat and feel sorry for ourselves. We thought we were helping each other out by offering comfort food when the other was having a bad day, when before we would have suggested something active like a run, or a hike, or a walk around the neighborhood.

Little by little we started to feel worse. Our clothes weren’t fitting…we were unhappy all the time…and we knew something needed to change, sooner rather than later.

My husband was the first to take action. A few months ago, he approached me with a meal plan he got from a nutritionist friend of his. When I first it, I cringed and immediately started to think of a hundred reasons why it wouldn’t work or why I wasn’t going to do it. It was pretty restrictive, with very low carbs and almost no sugar at all. It also limited portion size which is something we both desperately needed. At first I wanted to say no. I told myself that all I needed to do was another Whole30 and I was confident I’d get back on track. But my husband needed this, and in support of him (and because I needed it too, whether or not I wanted to admit it or not), I agreed.

He also approached me with something I’ve been adamantly against for years.

I’ve done some crossfit type workouts in the past, although admittedly never any of the Olympic weightlifting stuff. Most of what I did was body weight exercises like squats and burpees and sprints, not that there is anything wrong with any of those exercises. It was the crossfit stereotype that I had no interest in – trying to push tractor tires around, working so hard you throw up (no, thank you!), pushing other people so hard they throw up, snubbing your nose at any other type of workout…it wasn’t a crowd I wanted to be a part of.

But then Kevin found a crossfit gym in our area that he was really interested in. The biggest sell was their mission statement, which includes a line on Faith: seeking to put other’s needs above ours as we live out our Christian values. He loved the fact that faith was so important to the coaches/owners that they wanted to be known for it and I agreed wholeheartedly, although I still didn’t want to go to a class. However, they also offer a free Saturday morning class for people who just want to come and try it out.

As previously mentioned, I was not one of those people.

Unfortunately (or fortunately?) for me my husband was one of those people and so he signed us up. And when he approached me about it on the Friday night before, I agreed to go. When I woke up on Saturday morning I was singing a different tune.

Admittedly, I was cranky. And rude. And I’m surprised that he didn’t just throw his arms up in defeat (or disgust) and leave me at home, which is what I deserved. Instead he put up with my bad attitude, handed me a travel mug of coffee, and packed me into the car.

I couldn’t have been more wrong.

The Saturday morning classes are tailored to people who have never done crossfit but want to see what it’s all about. They don’t use any barbells or do any Olympic weightlifting – in fact, members must complete a mandatory two week “Basics Class” to learn all the proper techniques and moves prior to participating in any of the regular weekly classes. On Saturdays they do a group warm-up; then they review all the moves of that day’s workout, and then we go!

I was relieved when I saw the WOD (workout of the day) written on the whiteboard:

All moves that I knew how to do – hooray! Not only was the workout a lot of fun but I pushed myself, felt great, AND met a lot of new and friendly people. By the time we left Saturday’s class, I was hooked.

We signed up for the two week Basics course that same day, and I quickly learned that this gym is not at all like the stereotype. For one thing (and probably the most important thing), the coaches are incredibly focused on good form and technique. Instead of pushing someone past their limits or forcing them to do more weight, they make gentle (or sometimes not so gentle, depending on the situation) corrections to form, and they always want to know if there’s something going on that might require you to take it easy during that day’s class. Don’t get me wrong, there have been more times than I can count where a coach (correctly) suggested I should add more weight, and I never once regretted it. That said, if I try something that’s too heavy and my form suffers, they are more than quick to tell me to decrease the weight. The other thing I like about our gym ties into their faith-based mission statement. Although our gym doesn’t have crossfit classes for children, it’s very family oriented and it’s not unusual to see a pack and play set up off to the side holding a bouncing toddler cheering us on. Also – this may be insignificant to some but to me it’s important – it’s a very positive, upbeat community. There’s no (okay, there’s limited) swearing, and instead of screaming at others to push harder or to add weight, everyone cheers each other on during the workouts, particularly if someone is having a rough time on it and needs some encouragement to finish their sets or reps. It creates a welcoming, friendly environment and Kevin and I have come to view the coaches and other members as family.

Needless to say, I am so glad Kevin dragged me to class that Saturday! It’s a decision I don’t think either of us will ever regret.